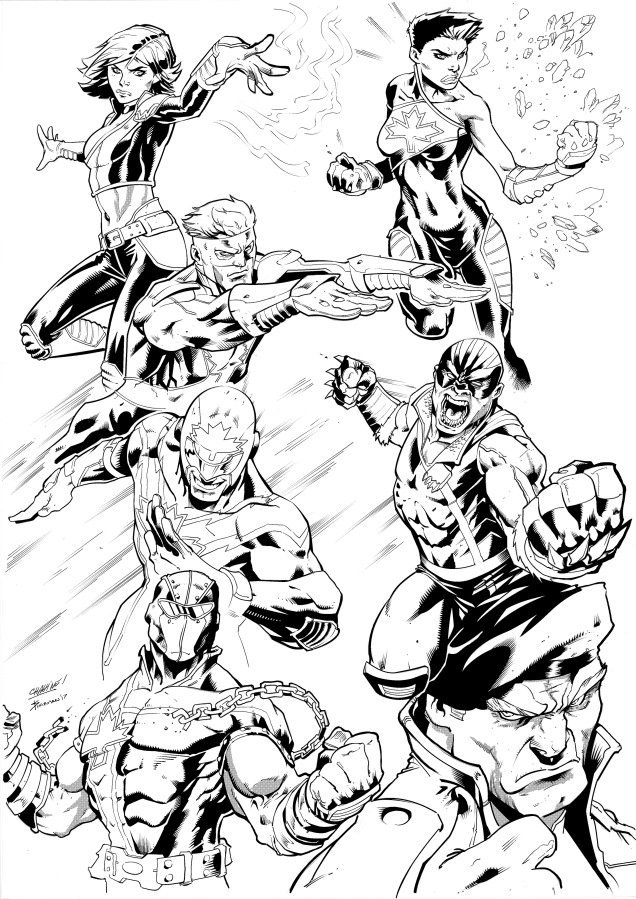 My latest page of inking, commissioned by Charlie McElvey.

On November 19th 2005 I attended the Brighton Comic Expo looking for a publisher for the comic book that would eventually be called Alpha Gods. That was the day I first met Harry Markos and while I’d like to say that I thought nothing of it at the time, you know, I’ll be honest…I was really fucking excited and thought the encounter was going to completely change my life. That was silly of me and I should have had much more realistic expectations. It was also correct.

At that point Markosia declined to publish my comic, and quite right they were too. If someone submitted my first draft of that book to me now I’d turn it down without a second thought. However, by the time of my next encounter with Harry at the Bristol Comic Expo in May 2006 I was colouring Smoke & Mirror for them, as well as some pin ups in the back of the Of Bitter Souls trade, and just about managed to achieve my aim of being a published comic creator by the time I hit thirty.

The next year saw the launch of Orang Utan Comics and Eleventh Hour…and more colouring work for Markosia, on books like Heretic, Kong of Skull Island, The Flying Friar and Shadowmancer. It also saw Harry approach OUC about producing an 80 page version of Eleventh Hour to be published by Markosia, which led to us returning to the Bristol Comic Expo in 2008 with Eleventh Hour Vol 1 and an Eagle Award nomination.

2009 saw me starting to get involved with lettering and production work at Markosia. Lettering books like Serpent Wars and The Doppelganger Chronicles, the latter being co-produced with Tynedale House. It was also the year that Alpha Gods made it to print, but published by Orang Utan Comics as Markosia had turned it down once again.

It was in early 2010, though, that I took over as Markosia’s pre-press guy and began doing all of the production work on their books. 2010 also saw the release of my first non-anthology writing work published by Markosia, Hero: 9 to 5. That same year I became Group Editor at Markosia. This was a big year for me because it’s also the year that Scorpio Pictures first optioned Alpha Gods.

So, then we get to 2013, and Markosia published Hypergirl and, eight years after first pitching it to Harry, a new hardback edition of Alpha Gods: Emergence.

The next year, 2014, saw the release of Hero: 9 to 5 – Quietus and The Intergalactic Adventures of Zakk Ridley…and my promotion to Editor In Chief.

More Alpha Gods followed in 2015, and my first prose publication, Words On A Wall and The Return of the Son of Eleventh Hour in 2017. I currently have another seven books in production with Markosia.

All of this is really just to say that meeting Harry at the Brighton Comic Expo in 2005 really did change my life. And here I am, twelve years later, having just spent several days with the man himself in meetings with some amazing people discussing potential deals which might take Markosia to the next level…and it has been an honour and a privilege to stand by his side and help him make Markosia the best damn publisher of graphic novels in the UK.

I’m a writer and artist, working mainly in comic books, and living in the South East of England (although I’m technically half Scottish and half English).

I run Orang Utan Comics, I’m editor in chief of Markosia, the writer of Alpha Gods, Hypergirl, Spacescape, The Intergalactic Adventures of Zakk Ridley and Hero: 9-5, and I also do freelance inking and lettering work for the likes of Markosia, Slave Labour, Top Shelf, Image, Marvel/Panini and I letter the official Doctor Who graphic novels for BBC Books.